"A peaceful island just north of Malta, perfect for tranquility and getting away from life's stresses... Home to Malta's cultural and traditional buildings, Mdina is the a sight-seeing paradise..."

A stunning walled city perched on a hilltop, its magnificent medieval walls have a golden tint to them. Once the capital of Malta, Mdina, combines Arabic, Norman, Renaissance and Baroque architecture into an amazing sensual feast of meandering alleys, ancient gateways and imposing walls. This makes it ideal for people seeking a city break that will transport them back in time: to a carless world that is both beautiful and alluring. Mdina, also referred to as Malta’s “Silent City” and “Noble City”, acted as the island’s capital from antiquity until the Medieval period when Valletta took on the mantle, and can trace its history back around 4,000 years. Mdina is considered by many to be one of Europe’s finest examples of an ancient walled city. With its timeless atmosphere and architectural and archaeological treasures, Mdina is one of Malta’s most revered attractions.

The city has a rich history for visitors to enjoy and has been occupied for more than 3000 years. It was also the place where St Paul came to meet the Roman governor, when he was shipwrecked on the island and a gorgeous 11th century cathedral stands on the spot that the meeting supposedly took place. This all serves to make Mdina a magical place that is ideal for anyone interested in history or architecture. 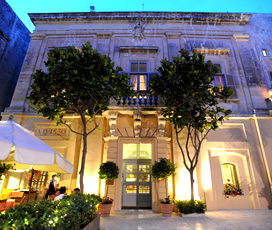 A fortified city it is situated in the Northern part of the island. It served as the capital of Malta from antiquity until the construction of Valletta in 1566, ensuring that it has plenty of amazing architecture and history. The city itself is located inland on one of the highest points of the island and has a population of around 300. It is located around 12 kilometres from the capital Valletta, ensuring that visitors can explore all the wonders that Malta has to offer.

The city was fortified by the Phoenicians in around 700 BC, due to its strategic location on one of the island’s highest points. It became the capital of Malta under Roman occupation, when the governor constructed his palace there. Local tradition believes that the Apostle St. Paul made is home in the city after he was shipwrecked in St Paul’s Bay. It underwent massive changes between 999 AD and 1091 AD during the Fatimid Period and was then properly fortified after the Norman conquest in 1091. It remained the capital of the island when Malta became the property of the Order of the Knights of St John and was the location that each grandmaster would swear fealty to the people. It gained the majority of its Baroque buildings after the massive earthquake of 1693 that damaged the town. Since then it has always been the second city of Malta, after they constructed the fortified capital Valletta.

The Maltese Natural History Museum is located in Mdina and offers an educational and a fun day out, where children can learn all about Mediterranean wildlife. As do the Mdina experience and Mdina dungeons, where children can enjoy interactive audio-visual tours that teach them about Malta and Mdina’s fascinating history on their family holiday. There is also plenty of nature and beaches are a short drive from the city, making it the perfect base to explore the rest of the country from.

Malta’s former capital is a beautiful walled city that combines baroque and renaissance architecture, making it ideal for people interested in history and culture. The old city is surrounded by intact walls, which can be walked along and provide spectacular views over the surrounding area. St Paul’s Cathedral is located in the main square and is supposedly the place where the famous saint met the Roman governor of the country, making it both beautiful and historic. While the Carmelite Priory Museum is renowned for its stunning domed roof, famed for the majestic fresco painted upon it.

Its nickname of ‘The Silent City’, pretty much sums up the social scene in the city. However, that doesn’t mean that guests won’t have a good time during their visit: there are plenty of great places to eat and drink inside the city walls, making it the perfect place to enjoy a quiet meal with friends, family or your significant other. The majority of these restaurants are set amongst stunning architecture, giving them majestic views over the old city. The nearby town of Rabat, is the place to head for those seeking clubs or a party.

Most famous for its Phoenician glass, coloured glass blown by mouth, it is one of those pieces that you can acquire to remember the city with. There are a huge number of shops that sell this famous Maltese product in the old city, which is fully pedestrianised, allowing visitors to explore it with ease. There is also plenty of more modern shops selling fashion items and a number of boutique jewellery shops selling iconic Maltese Crosses among other things.