"For a true Moroccan Holiday expeience, a visit to Fès is a must with plenty of cultural and historical sites to visit..."

Once Morocco’s capital city, Fès is an imperial city with a rich tradition of producing and inspiring artists, culinary masters and scholars. It is no wonder that Fès is the home of the oldest, continually running university in the world, the University of Al-Karaouine. These influences of old can still be felt today with stunning architecture found throughout the city and arguably some of the best cuisine in the world.

Fès also plays host to the largest car-free urban area in the world, the charming Medina of Fès el-Bali, an architectural wonderland of meandering streets, ancient mosques and pioneering universities. Whilst still relatively undiscovered by tourists, with its bustling Medina, new luxury hotels and restored riads, Fès is becoming a Moroccan destination set to rival Marrakech. It is an enchanting sensual feast that will encapsulate and engross you, making for a holiday that will remain with you forever. 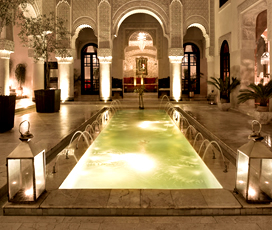 Located in the Northeast of Morocco it is generally believed to be the nation’s cultural capital. It is dominated by the iconic Fes el Bali, a majestic walled Medina, that was built during the medieval period and has lost none of its splendour. Fes has also been capital of the country during various points in its history, depending on the imperial limits of the rulers of Morocco at the time, ensuring that it has plenty of stunning art and architecture dotted throughout it. Today it has a population of around 1.1 million, making it the largest city in the country.

With a hot summer climate, it gets slightly cooler than many parts of Morocco in the winter. The hottest months are July and August when temperatures reach highs of more than 30 degrees and there are 11 hours of sunshine on average. This type of weather (though slightly cooler) persists between April and October, ensuring that it can be visited for the majority of the year for a city break. January is the coolest month, when the temperature averages around 11 degrees

As the oldest of Morocco’s imperial cities, it was established in 789 by Idriss I, a Berber king who colonised the entire area. It had become one of the largest and richest cities in the area by the late 9th century when the famous University of Al Quaraouiyine was built, making it one of the oldest in the world. By the 11th century immigration from Europe and Africa had swollen Fes’ population to a remarkable 500,000 and it was made the capital of the Merenid Empire 100 years later. During this period its intellectual and cultural importance earned it the nickname ‘the Athens of Africa’. It began to decline after the Ottomans conquered the country and moved the capital to Marrakesh, until the 18th century when a local ruler returned its capital status. It remained important after the French colonised the country in 1912 and Fes el Bali gained UNESCO status in 1981.

Fes is not especially renowned for its family activities and will certainly appeal more to older children than younger ones. This is mainly due to its reputation as the cultural capital of Morocco: a place of incredible architecture, wonderful history and rich art. Teenagers will unquestionably appreciate the walled Fes el Bali, whose colourful streets are decorated by a host of things for sale. While the Medersas and Qaraouiyine Mosque located within its walls are ancient buildings that anyone who is interested in history is sure to appreciate. The best view of the city can be found in the impressive Borj Nord fortress, which also hosts a weapons museum that will probably be more appealing to boys.

No trip to Fes would be complete without visiting the ancient Fes el Bali, the largest and most impressive Medina that can be seen today. It combines a host of souks with meandering streets and ancient buildings to create an area that you could spend a lifetime exploring and still not see all the wonders that it hides. The two Mederesas inside it were built in the 14th century and were vital centres of Islamic learning, while the 9th century Qaraouiyine Mosque is one of the oldest and most impressive in the world.

Like many Islamic people, Moroccans tend not to drink much alcohol, meaning that it is slightly harder to find vibrant nightlife than in Europe. This is especially true in the older part of town and visitors will struggle to find watering holes in Fes el Bali. Thankfully the newer part of town has plenty of nightclubs and hotels, where you can enjoy a drink and a dance, ensuring that there is something for everyone in Morocco’s capital of culture.

Fes is a shopper’s wonderland that provides the ideal blend of modernity and tradition. No shopping trip there would be complete without a visit to the Medina, where there are a host of local traders, selling handmade goods from around the country. Visitors will of course be expected to haggle when purchasing and you should never immediately pay the display price as it is almost always exaggerated. There are a great range of ceramics sellers there, where you can purchase Morocco’s iconic rainbow-coloured pottery with the most famous shops called: Art Naji and Art Agile. While if you want to eat local produce then the Rue el Attarine is the place to go. However, the best way to shop in Fes is simply to wander through the meandering streets and take in all the fantastic things on offer.