"A modern twist to a country filled with history, Casablanca is a cosmopolitan city waiting to be explored..."

Casablanca is the largest city in Morocco and is one of Africa’s leading cities, both economically and demographically with one of the leading financial centres on the continent. There is so much more to Casablanca than a classic eponymous film starring Humphrey Bogart. This former French colonial post is the most cosmopolitan and Westernised city in Morocco. ‘Casa’ as the locals refer to is located on the country’s north-west coastline, just 86km south from Rabat. Stopping off in Casablanca is a must for tourists travelling around Morocco to experience a more modern side to this country with a Parisian twist.

Casablanca is modern Morocco at its absolute best: a modern and vibrant port city perched on sparkling blue waters,ideal for a city break. It is a bustling metropolis filled with young people, with big ideas, hopes and dreams about the world. While also playing host to more historic places like the old Medina, ensuring that it is the perfect blend of old and new. At its centre is the mammoth Hassan II Mosque the second largest in the world: it is a city that is alive and a place that everyone should see at least once. 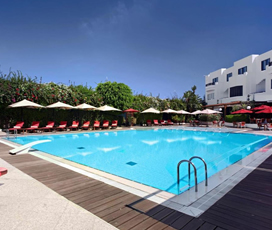 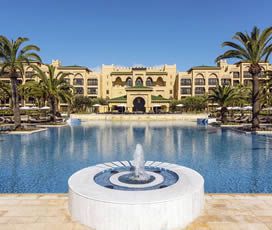 Located on Morocco’s Atlantic Coast, it is close to halfway between the Mediterranean and the Atlas Mountains. This important strategic location has made it one of the country’s most important economic hubs throughout its history. It has a rich colonial legacy, giving it a fascinating blend of French and Moorish architecture and also hosts the second largest mosque in the entire world. It is the biggest city in Morocco with a population of more than three million, ensuring that there is loads for visitors to do during their visit.

Enjoying a temperate climate throughout the year, its temperatures average around 23 degrees in June, July and August and dropping to a minimum average of 13 degrees in January. This makes it a great place to have an enjoyable holiday close to the blue seas of the Atlantic Ocean.

First inhabited by Berber fishermen in around the 10th century BC and quickly became a part of Phoenician trading routes, since it was a useful stopping point. It came to prominence in the 14th century AD, under the Merinid dynasty, due to its proximity to Spain and quickly became a rich hub of commercial trade. However, it still only had a population of 8000 as recently as 1830, demonstrating how quickly it has grown. It really began to expand under the French protectorate, which ruled the country between 1912 and 1956, becoming an industrial and shipping hub. It was during this period that the famous film is set, due to the large amount of spying that occurred in the city during World War II. Today it is Morocco’s financial and industrial hub and continues to expand at a ferocious pace.

Teenagers are sure to be enamoured by the winding streets of its Medina and sheer scale of the Hassan II Mosque. This coupled with seaside villages, such as Safi and Oualidia, which are slightly removed from the main part of town and offer great history, along with beautiful beaches, ensure that there is plenty for older children to enjoy there.

No trip to Casablanca would be complete without a visit to its sprawling Medina that is the very definition of traditional Moroccan culture. Its ancient streets are crammed with people selling locally produced goods, making for an experience that no visitor will want to miss. The vast Hassan II Mosque is the second biggest in the entire world and an architectural wonder that every visitor to Casablanca should see. While the historic port and promenade area are crammed with cafes and shops that are ideal for sitting, relaxing and people watching.

Its night-time scene is not short of bars in the centre of town. The best nightlife is found in the luxurious western hotels and the Ain Diab & Anfa beachfront suburbs. This area is tightly managed, and patrons will be expected to be dressed well.

The shopping in Casablanca is not as plentiful as Fes or Marrakesh, although there are still some great deals to be found in the city. The best market is the Souk Habous, where shops sell a variety of traditional Moroccan goods and the usual haggling over price is a prerequisite. There is also the Morocco Mall, which is the poshest destination in the entire country and is located in the rich Arab dominated Ain Diab district: there you will be able to shop for a vast array of western luxury goods.